DUTTON, Mont. — Vern Greyn was standing in the raised bucket of a tractor, trimming dead branches off a tree, when he lost his balance. He fell 12 feet and struck his head on the concrete patio outside his house in this small farming town on the central Montana plains.

Greyn, then 58, couldn’t move. His wife called 911. A volunteer emergency medical technician showed up: his own daughter-in-law, Leigh. But there was a problem. Greyn was too large for her to move by herself, so she had to call in help from the ambulance crew in Power, the next town over.

“I laid here for a half-hour or better,” Greyn said, recounting what happened two years ago from the same patio. When help finally arrived, they loaded him into the ambulance and rushed him to the nearest hospital, where they found he had a concussion.

In rural America, it’s increasingly difficult for ambulance services to respond to emergencies like Greyn’s. One factor is that emergency medical services are struggling to find young volunteers to replace retiring EMTs. Another is a growing financial crisis among rural volunteer EMS agencies: A third of them are at risk because they can’t cover their operating costs.

“More and more volunteer services are finding this to be untenable,” said Brock Slabach, chief operations officer of the National Rural Health Association.

Rural ambulance services rely heavily on volunteers. About 53% of rural EMS agencies are staffed by volunteers, compared with 14% in urban areas, according to an NRHA report. More than 70% of those rural agencies report difficulty finding volunteers.

In Montana, a state Department of Public Health and Human Services report says, about 20% of EMS agencies frequently have trouble responding to 911 calls for lack of available volunteers, and 34% occasionally can’t respond to a call.

When that happens, other EMS agencies must respond, sometimes having to drive long distances when a delay of minutes can be the difference between life and death. Sometimes an emergency call will go unanswered, leaving people to drive themselves or ask neighbors to drive them to the nearest hospital.

According to state data, 60% of Montana’s volunteer EMTs are 40 or older, and fewer young people are stepping in to replace the older people who volunteer to save the lives of their relatives, friends and neighbors.

Finding enough volunteers to fill out a rural ambulance crew is not a new problem. In Dutton, where Greyn fell out of the tractor bucket, EMS Crew Chief Colleen Campbell says getting people to volunteer and keeping them on the roster has been an issue for most of the 17 years she’s volunteered with the Dutton ambulance crew.

Currently the Dutton crew has four volunteers, including Campbell. In its early days, the Dutton ambulance service was locally run and survived off limited health insurance reimbursements and donations. At its lowest point, she said, her crew consisted of two people: her and her best friend. 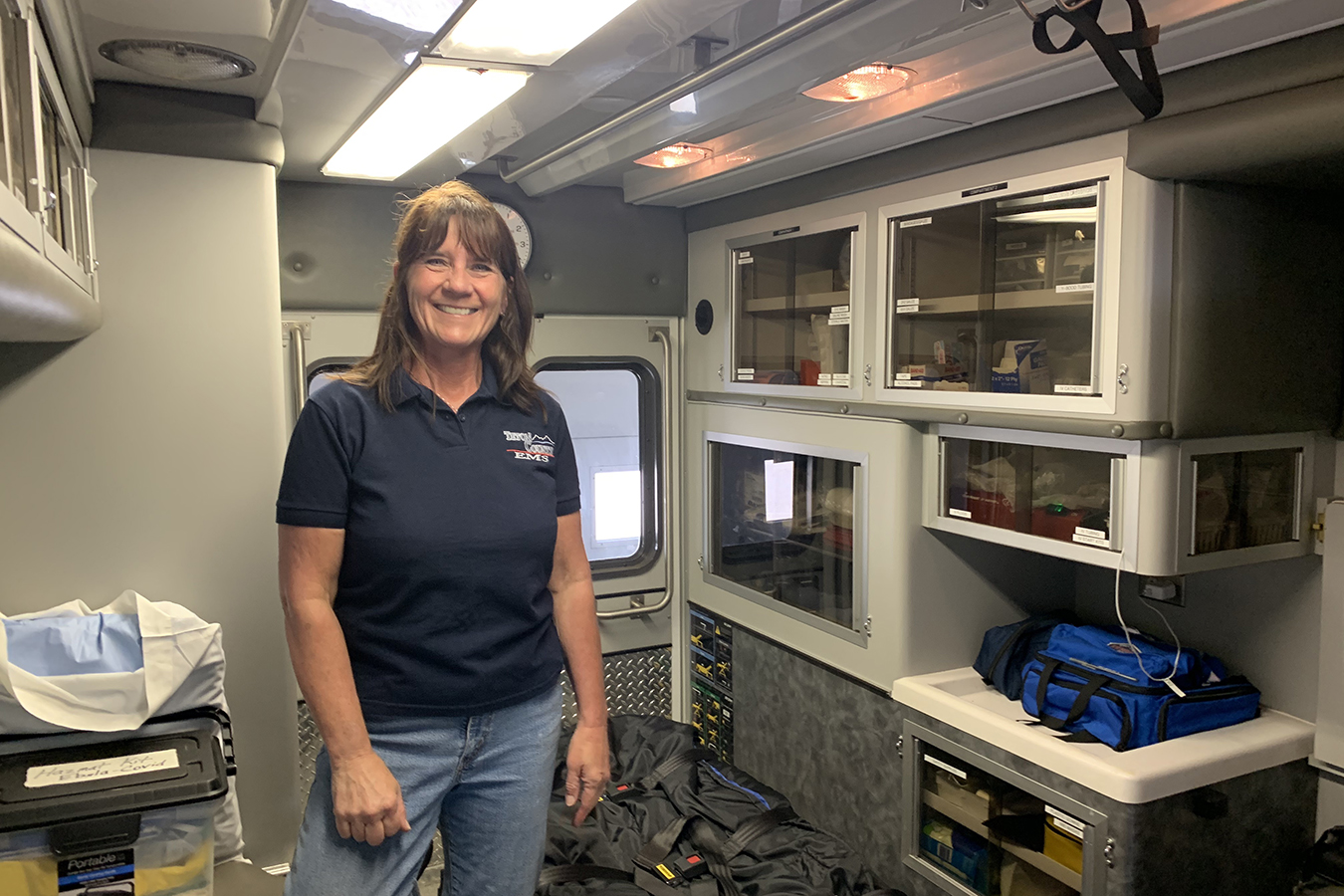 That made responding to calls, doing the administrative work and organizing the training needed to maintain certifications more than they could handle. In 2011, the Dutton ambulance service was absorbed by Teton County.

That eased some of Campbell’s problems, but her biggest challenge remains finding people willing to go through the roughly 155 hours of training and take the written and practical tests in this town of fewer than 300 people.

“It’s just a big responsibility that people aren’t willing to jump into, I guess,” Campbell said.

In addition to personnel shortages, about a third of rural EMS agencies in the U.S. are in immediate operational jeopardy because they can’t cover their costs, according to the NRHA.

Slabach said that largely stems from insufficient Medicaid and Medicare reimbursements. Those reimbursements cover, on average, about a third of the actual costs to maintain equipment, stock medications and pay for insurance and other fixed expenses.

“So, it’s not possible in many cases without significant subsidies to operate an emergency service in a large area with small populations,” he said.

Slabach and others say sagging reimbursement and volunteerism means rural parts of the U.S. can no longer rely solely on volunteers but must find ways to convert to a paid staff.

Jim DeTienne, who recently retired as the Montana health department’s EMS and Trauma Systems chief, acknowledged that sparsely populated counties would still need volunteers, but he said having at least one paid EMT on the roster could be a huge benefit.

DeTienne said he believes EMS needs to be declared an essential service like police or fire departments. Then counties could tax their residents to pay for ambulance services and provide a dedicated revenue stream.

Only 11 states have deemed EMS an essential service, Slabach said. 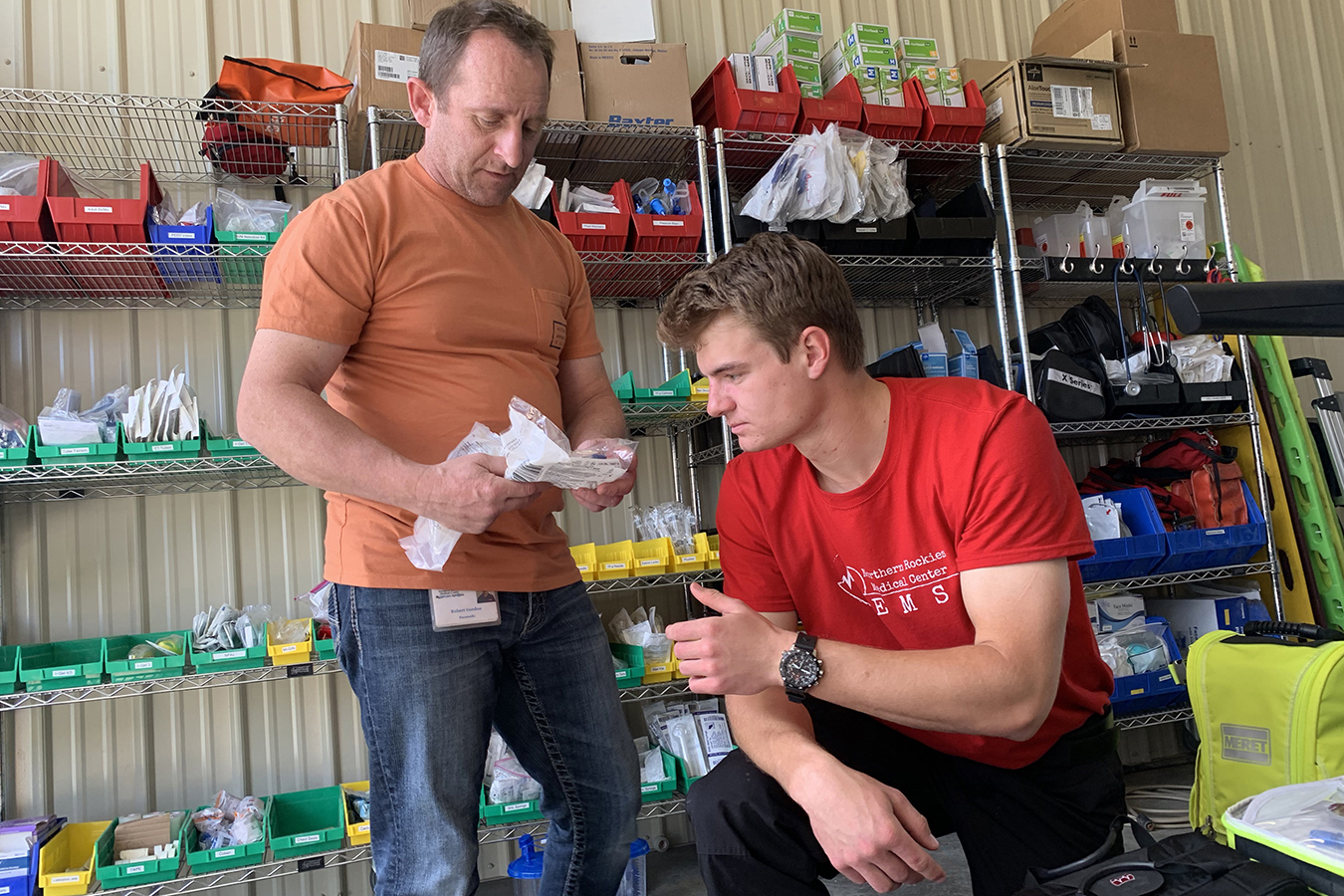 The Montana health department report on EMS services suggested other ways to move away from full-volunteer services, such as having EMS agencies merge with taxpayer-funded fire departments or having hospitals take over the programs.

EMS Manager Nick Efta, a former volunteer, said the transition stabilized the service, which had been struggling to answer every 911 call. He said the service recently had nine calls in 24 hours. That included three transfers of patients to larger hospitals miles away.

“Given that day and how the calls played out, I think under a volunteer model it would be difficult to make all those calls,” Efta said.

Rich Rasmussen, president and CEO of the Montana Hospital Association, said an Ennis-style takeover might not be financially viable for many of the smaller critical access hospitals that serve rural areas. Many small hospitals that take over emergency services do so at a loss, he said.

“Really, what we need is a federal policy change, which would allow critical access hospitals to be reimbursed for the cost of delivering that EMS service,” he said.

Under current Medicare policy, federally designated critical access hospitals can get fully reimbursed for EMS only if there’s no other ambulance service within 35 miles, Rasmussen said. Eliminating that mileage requirement would give the hospitals an incentive to take on EMS, Rasmussen said.

“It’s a long haul to do this, but it would dramatically improve EMS access all across this country,” he said.

A Centers for Medicare & Medicaid Services pilot program is testing the elimination of mileage minimums for emergency services with select critical access hospitals.

“We know if we’re not going, nobody is coming for the patient, because a lot of times we’re the last resort,” he said.

Missoula EMS is responsible for calls in the city and Missoula County. Whalen said Missoula EMS has agreements with a couple of volunteer EMS agencies in smaller communities to provide an ambulance when volunteers have difficulty leaving work to respond to calls.

Those agreements, on top of responding to other towns where 911 calls are going unanswered, are taking resources from Missoula, he said.

Communities need to find ways to stabilize or convert their volunteer programs, or private services like his will need financial support to keep responding in other communities, Whalen said.

But lawmakers’ appetite for finding ways to fund EMS is limited. During Montana’s legislative session earlier this year, DeTienne pushed for a bill that would have studied the benefit of declaring EMS an essential service, among other possible improvements. The bill quickly died.

Back in Dutton, the EMS crew chief is thinking about her future after 17 years as a volunteer. Campbell said she wants to spend more time with her grandchildren, who live out of town. If she retires, there’s no guarantee somebody will replace her. She’s torn about what to do.